The importance of eustress in dog training

Sometimes when you’re training a dog, especially a fearful dog, there comes a time when you need to expose the dog to a stressful situation with the goal of helping the dog overcome his fear. Dogs, like people, have fears and mental blocks that result in phobias and insecurities and they need help overcoming that fear just like we do. Endocrinologist Hans Selye coined the term “eustress” to mean beneficial stress – either psychological, physical (e.g. exercise) or biochemical/radiological (hormesis). It comes from the Greek prefix eu- meaning “good” and stress, literally meaning “good stress.”

When I’m working with a fearful dog, one of my goals is to build his confidence. That means playing the role of a coach or mentor and helping the dog overcome his fear. Fears vary from dog to dog. Some dogs are afraid of chairs, other dogs are afraid of slippery floors. Whatever the fear, living with fear creates a mental roadblock that psychologically limits the dog’s ability to be fully rehabilitated. As a balanced trainer, as a trainer who invests in each and every dog that walks through my doors, I seek to help dogs reach a balanced state of mind. I want to fully rehabilitate dogs from the inside out.

I recently spoke with a trainer who spent several months working with a fearful aggressive dog. One of the first words that came out of her mouth was “treat.” In her training, she used treats in an attempt to help the dog overcome his fear. She believed in using something positive (food) to help a dog overcome his fear in an attempt to help the dog associate something positive with a negative situation. Instead of creating a positive association with the trigger that was resulting in aggressive outburts, this trainer was unknowingly reinforcing fearful behavior and aggression. Dogs don’t think like we do. They don’t rationalize using human psychology, they’re dogs. In the course of a 10 minute conversation, the trainer I was talking to used the word “treat” more times than I could count. And after months of working with the dog, she was dumbfounded because his aggression was getting worse, not better.
When working with fearful dogs, we have to understand that we are addressing their current state of mind. Dogs live in the moment. So when we’re 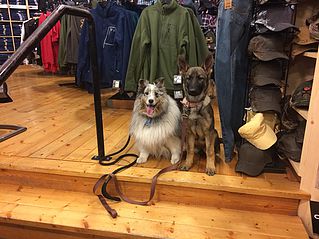 trying to help a dog, we must understand what he’s thinking in the moment and be very careful of what state of mind we are reinforcing. Simply put, we cannot use treats to reward dogs for an unhealthy state of mind. When a dog exhibits signs of fear, such as panting or panicking, if we give the dog a treat and tell him “Good boy, it’s okay” we are essentially telling him “It’s okay to be fearful. It’s okay to panic.”

Now, I’ve said before that there is no cookie cutter way to approach training. That goes both ways. For some dogs, and it really depends on the individual dog, using a reward such as a treat can be helpful. For a dog that’s fearful of people, for example, having a stranger toss a treat in the dog’s direction can help the dog associate something positive (a treat) with something he’s afraid of (a stranger). However, the dog has to want the treat, and the treat has to be tossed at a comfortable distance without any signs of confrontation or threatening body posture (e.g., forward facing with eye contact from the stranger) in order for the dog to learn to be more comfortable with the situation. If the dog refuses to eat the treat, and treats are continually tossed at him, that exercise is simply teaching the dog to refuse treats in the presence of strangers. (You can always test a dog’s stress level by checking to see if an otherwise food-motivated dog cares for food in the presence of a stressful situation.)

Now, let’s talk about eustress. When I’m working with a fearful dog, it’s my goal to help the dog reach a balanced state of mind, and all reputable trainers will agree that confidence is necessary, not optional, for a dog to be considered truly balanced. 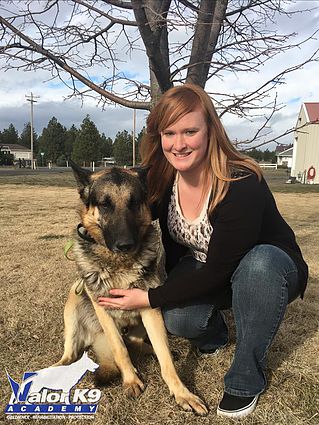 Let’s take Atlas, for example. Atlas is a five year old German Shepherd who was recently surrendered to a shelter in California then flown to SpokAnimal in Spokane, WA, where he was rescued by a nonprofit rescue called Power of the Paw. Atlas is a fearful dog who has severe separation anxiety. One might think his primary issue is his separation anxiety, but it’s actually his fear and insecurity. Atlas is so uncomfortable in his own skin – so unsure of himself – that he’s afraid of being left alone, hence the separation anxiety and highly destructive behaviors he exhibits when trying to escape the crate, room etc.

I had my first private lesson with Atlas yesterday, and after working on some crate exercises and treadmill training, we headed outside to the agility course. Atlas did fine with the jumps but he was very nervous on the Dog Walk. He panicked, tried to jump off, refused to move, and froze in place. If anybody looked at him in that moment, he would’ve appeared to be highly stressed: panting, head hanging low, shaking, eyes darting left and right. He was stressed.

But we didn’t stop there. You see, what Atlas was experiencing is called eustress. I knew that he could physically handle walking on the dog walk – he did not have any physical limitations that would prevent him from doing it – he just had mental roadblocks. He didn’t think he could do it. He was afraid. So instead of backing down and giving up, I did the Dog Walk over and over and over with him. I didn’t praise him or try to comfort him, I didn’t use treats to try to bribe him (he wouldn’t have taken the treats anyway). I adapted a coach-like attitude and projected confidence to steer him in the right direction. I told him “ You can do this!” And together we did the Dog Walk over and over and over. And with each repetition, his stress started to fade, his head got higher, his panting slowed down, and his chest started to fill with air. He was gaining confidence by realizing that he can do it! And by the end, he was walking confidently across the Dog Walk, a completely different dog from start to finish. Does that mean he’s rehabilitated? No, but it’s a step in the right direction. We’re building trust (in us) and confidence (in himself.)

Now I’m going to step into your shoes (the reader): Reading about Atlas’s experience on this page is, or would be, much easier than actually witnessing it. You might’ve felt bad for him but then you skipped to the end of the paragraph to make sure it has a happy ending. But I’m going to take a wild guess and say that at least half of you would not have been able to witness it in person without walking away, getting upset with me, or trying to tell him “It’s okay” and giving him a treat.

What we’re failing to realize is that no dog wants to live with stress. No dog wants to live in fear, especially not when it’s something in their own house (e.g., the vacuum cleaner or blender). So why do we try so hard to avoid stressful situations for our dogs? Is it because we ourselves fear stress? Is it because we don’t know how to handle stress? Are we fearful? Are we afraid?

Dogs are our mirrors. Stop what you’re doing for a second and think about that. Dogs reflect who we are, they reflect their environment, and they never lie. One of the best things we can do for new puppies is give them the opportunity to experience life and all it has to offer. That means exposing them to new sights, sounds, people, places, surfaces, and animals on a daily, or at least weekly, basis. And for adult dogs, I cannot stress enough the importance of confidence building and being mindful to ensure our dogs are confident and curious instead of fearful and unsure. For example if your dog is afraid of the laundry room, take the necessary steps (literally) to help your dog overcome that fear. And if you don’t feel confident enough to do it, find a behavior trainer who will. I’ve helped 100s of dogs overcome fears – everything from lawn mowers to office chairs to stairs – it just takes time, patience and knowing exactly what each dog needs in the moment.

Let me explain eustress to you in a different way using sky diving as an example. In January 2014, my then-boyfriend Justin and I went on vacation to Costa Rica. As a surprise, Justin planned a sky diving adventure for us. I’m an adrenaline-junkie (guilty) so the idea of jumping out of an airplane sounded like a blast to me. But I won’t lie, there was a split second right before I jumped when I thought “This is crazy!” Was I feeling stressed in that moment? Absolutely! But it was a good kind of stress, and the moment I jumped, that stress vanished into thin air and I had the time of my life! What an amazing experience! I’m so glad I did it. Even better, when we landed, Justin got down on one knee and proposed. 🙂 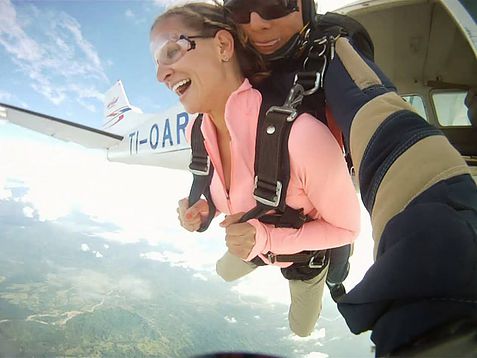 Think about how many people get in the air, and when “the moment of truth” comes, they chicken out. They refuse to jump and stay in the plane. I’m going to guess that most of the people who back out never get in a plane and try again. They live with the fear of the unknown and, whether they realize it or not, that fear puts up roadblocks in their mind which might be detrimental in the long run.

Dogs are much the same way. That’s why it’s so important to understand that even though it’s possible to just put your dog in another room when the vacuum cleaner comes out, you need to recognize your dog’s fear and take the time to work him through it. It’s important to realize that even though the actual training session with the vacuum might be stressful initially for Fido, helping him overcome his fear will help him live a happy, balanced life.

When working with your dog, start with a “less scary” fear and tackle it one step at a time. Don’t rush your dog. Always end on a good note. And if you aren’t comfortable working with your dog, find a professional dog trainer that can help. Remember, don’t give up and don’t let your dog give up. It’s very important to end on a good note. You may have to repeat the exercise several times before your dog overcomes his fear, but each time you tackle the fear your dog’s reaction should lessen and he should get more and more calm.

I hope this blog post has been helpful to you. I woke up early this morning with this topic on my mind so I knew I had to write about it. If you have any questions, or if anything is unclear to you, please ask me. I’m an open book, and I’m always willing to help.