For the love of Duke

Over the past 15 years, I’ve trained hundreds of dogs in various settings. I love all breeds, but German Shepherds hold a special place in my heart. Let me tell you why…

For years, I lived alone. I traveled alone. I stayed in hotels alone. I had several close calls with strangers, mostly while traveling, and to be perfectly honest, I didn’t always feel safe. I didn’t carry a gun, because I didn’t know my rights, and I was afraid that if I had a gun and there was an intruder, I would quickly become overpowered, and the weapon would be used against me.

When I was in the military, I lived in the country and one night shortly after moving in, someone broke into my vehicle and stole my belongings. There were only a few things worth stealing in my car, but enough to probably encourage him to come back. I called the cops, but there wasn’t much they could do. I had no evidence and no idea who broke into the car. Zoey was just a puppy at the time, and she was too young to alert bark so for the next few nights I was restless. I was living in fear because I knew that at any point someone could break in, and I would be helpless.

I started looking on Craigslist for a large breed dog and ended up adopting a goofy two-year-old German Shepherd named “Thor” who I renamed Duke. I worked with him every evening after work, and in a matter of weeks he went from being hyper and unruly to highly obedient, calm and alert. Since I still didn’t know who had robbed me, I bought a bright red muzzle and walked Duke around the neighborhood every evening. When strangers approached us, or stopped their cars to talk to us, I gave Duke a covert hand signal which alerted him to bark. His bark alone kept people at bay. They didn’t know he was a friendly dog; alll they knew was that the little blonde girl that just moved in has a big German Shepherd that flips out when they approach. Duke came to my rescue twice over the next few months.

The first time, I was out in a field down the road from my house. I had Zoey with me, who was about six months old at the time, and a rescue puppy that I was fostering and training to prepare for adoption. Out of nowhere, two rabid dogs came out of the woods and stood at the edge of the field. They were foaming at the mouth and barking aggressively. Without hesitation, Duke jumped in front of me and the puppies and stood his ground. Hackles up, he let out the lowest, deepest, most threatening growl I had ever heard. Before that moment, I had never even heard him growl. He stood his ground long enough for me to get to the car then he chased the dogs off and ran back to the car. To this day, the whole sequence of events seems unreal.

The second time, I was in downtown Nashville unloading luggage from the trunk of my car. It was hot out, so I had the windows rolled down and Duke and Zoey were in the back of the car. As I turned around, in the blink of an eye, Duke jumped from the back of my car and knocked an unkept, homely-looking man to the ground. The man was only a few feet from me, and probably didn’t see the dogs in the car. I had a designer purse slung over my shoulder. I’m guesing that was his target. But he didn’t have a chance to rob me, because Duke knew his intentions and acted upon instinct. After knocking the man to the ground, Duke stood back and barked aggressively as the man scrambled to his feet and ran away. I told Duke to “Fuss” (heel), and he immediately ran to my side then resumed barking until the man was completely out of sight. I had never felt so safe. From that moment on, I was hooked on German Shepherds.

German Shepherds aren’t for everyone. They are a high energy working dog that need daily exercise, training and mental stimulation, but if you can give a German Shepherd what he needs, the unconditional love and loyalty you’ll receive in return is worth every second of time and every penny you’ll ever invest in the dog. 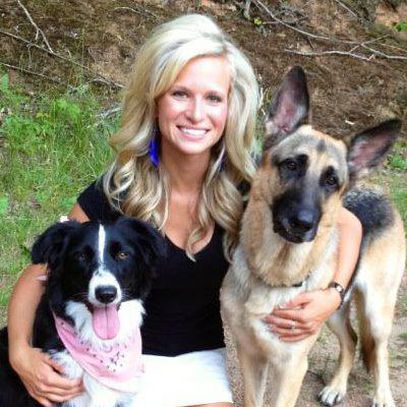